If you search on Google for other case studies about Google Ads specifically for hotels (formerly Google Adwords), you won’t find much.

And surely not because there are no cases, so why?

No hotel wants to share any sensitive data of course, especially when, like in this case, there’s a clear problem that needs to be fixed (who wants to flaunt his own problems?).

Because of that, showing a case study other than just talking about it, becomes difficult… yet not impossible.

In fact, this time I took the chance of an audit I was asked to perform over a typical example of misguiding data, to create my first Google Ads for Hotels, by visually replacing the real name of the hotel in all the screenshots I will be sharing underneath with a fantasy hotel name.

Simply put, instead of the real hotel name, I’ll be using “atalanta hotel“.

This is possible with a little trick that anyone with a basic knowledge of HTML can replicate on any browser, being it Chrome, Firefox or Safari.

Rest assured though that everything else such as keywords, search terms and, most importantly, data, are real and authentic. My word.

That said, let’s see together how this hotel (atalanta hotel 😉) went from losing money to generating money.

Early in June 2021 I received the following email. It’s copy/paste:

“Hi Ale,
[…] We’ve just noticed that PPC performance for [hotel name] has been very poor in recent months, […] to the point where they spent about $670 in April and only made about $485.
We’re losing money on Ads.”

Even though the marketing Ad Spend is very low ($670/month), the revenue attributed to Google Ads campaigns is even lower: $485.

So yes, the hotel is losing money… assuming though that these numbers reflect the reality.

In fact, very often when facing a similar situation the problem lies in the technical setup, not in the numbers.

Technical setup may include 2 different aspects, which represent the answers to the following questions:

Attribution model is a huge topic that implies hundreds difference facets as to why two identical campaigns may result in totally different generated revenue.

In this particular case though, the attribution model assigned to the booking conversions in Google Ads is not a problem.

Neither have I found issues related to a potential loss in the transactions (and revenue) tracked and assigned to Google Ads campaigns.

So is the hotel really losing revenue?

Let’s start the analysis by looking at some report in Google Analytics, by comparing 2 different months:

April was the critical month mentioned in the initial email I received, whilst November was one of the last months where performance appeared to be normal. So, ultimately, the hotel was not losing revenue.

There would be many things to say about the above numbers, too. However, for the sake of this case study, let’s just focus on the very core problem: were the Google Ads campaign underperforming for this hotel?

The same report though, just a little bit underneath, revealed something more: Paid Search, which is the default channel Google Ads campaigns are associated to, dramatically underperformed: -79%.

At first glance it looked like the hotel didn’t lose revenue; instead, revenue simply shifted to other channels, like Organic Search and Direct.

Does it not sound too good to be true? More revenue and, in addition, from organic channels.

In fact, checking another report:

No need to look at the numbers, as the timeline said it all: Revenue loss being a consequence of this huge decrease of paid traffic (whilst the overall traffic increased).

So why did this happen? Why the hotel experienced this huge decrease in traffic from Google Ads?

When selecting and comparing the two months of April 2021 and November 2020, this is what Google Ads came up with: Again, we might argue the reasons behind such campaign structure and names, but that’s beyond the point for the purpose of this case study.

So let’s move on and finally get to see…

In a nutshell, this is how the overall situation looked like: Conversions, in fact, are not only limited to room bookings. Counted as conversions can be people who, for example:

In other words: micro conversion.

Now that we’ve clearly identified the problem, we need to dig further to understand WHY this happened, in order to understand HOW to fix and turn this hotel account back to generate revenue.

Time to move back on to Google Ads console.

So why did this campaign (“Category 2020”) not generate revenue?

Following is the keyword report of this campaign in Google Ads, for the full month of April 2021: First, the campaign spent $558 over a total Ad Spend of $670. This means 83% of the entire monthly spent for a campaign that didn’t generate a single dollar in return.

Second, keywords: they are all generic and popular keywords. Per se, this is not bad. However they are all Broad-match type keywords.

Broad-match type keywords are very appealing but extremely tricky and dangerous, as they can trigger the ad on search terms that are far too broad and ultimately not interesting for the hotel.

So now, we have to possible indications as to why the campaign didn’t perform:

Let’s have a look.

Following is the exact same report in Google Ads as above, with the only inclusion of Conversion Action. All the keywords associated to this campaign got people to call the hotel, but as seen they generated no bookings (we’re talking about reservations from the booking engine).

No bookings = no Revenue.

Check in fact the last column of the report (Conv. value): in case of reservations, we would see the amount booked. Instead, the ratio between Conversions and Conv. value is 1:1 since Call from ads has been set up with a fixed value of 1$ per conversion.

Why no bookings? Why only Call from ads?

From the list of keywords above, let’s pick the 1st one, which produced the highest cost in the given period, and let’s see what Search Terms triggered the ad. 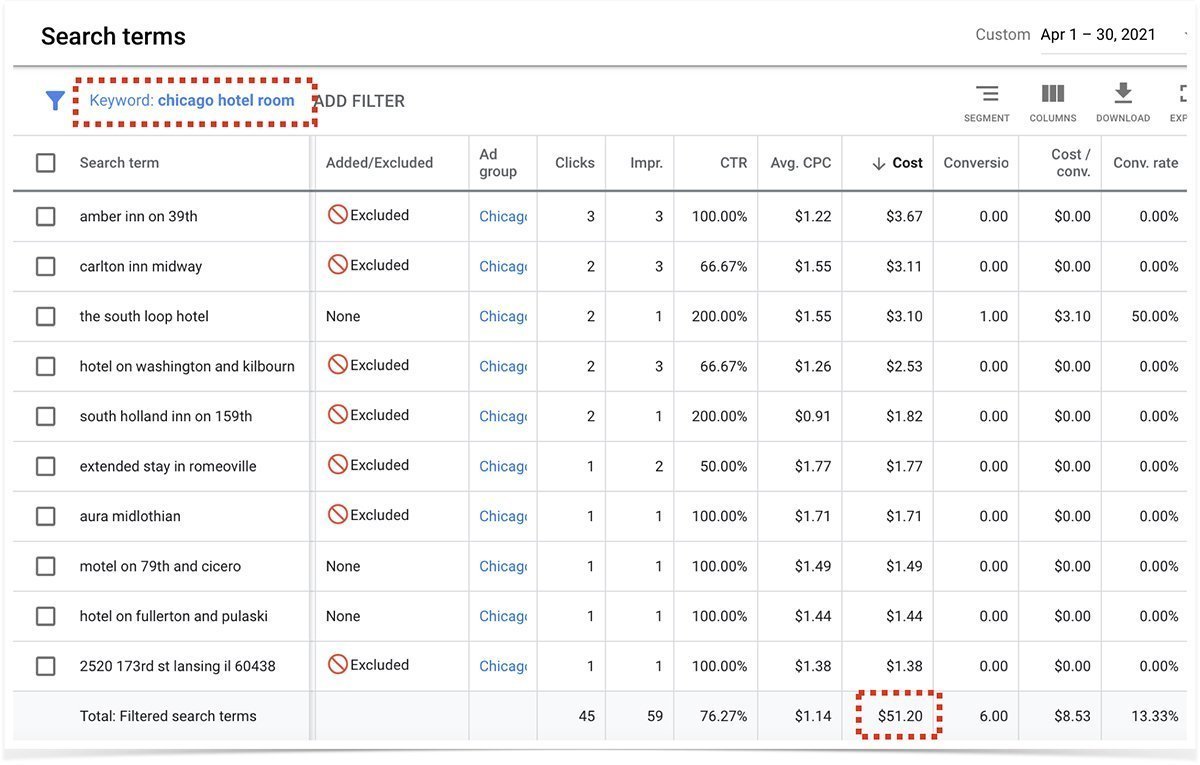 Just the list of Search Terms associated to this generic keywords made the hotel spend $51. One single keyword representing almost 8% the whole monthly ad spent.

And if you see these search terms, they are all related to other hotel brand names.

The hotel was spending money to get calls from people who searched for other hotels.

Is it worth it?

Apparently not, since most of those search terms have thereafter been used as negative keywords, as you can see from the label Excluded in the second column.

How did the hotel perform in the past?

In the attempt to compare apples to apples, how was the situation in November when some revenue was flowing in from Google Ads campaigns?

Let’s go through the same process, by taking a look at the campaign that back in November 2020 was driving the highest revenue: “2020 Paid Search“. *Before we continue, just keep in mind that I have manually replaced the keywords including the real hotel name with “hotel atalanta”. 😉

Remember? The counterpart campaign in April consumed 83% of the budget.

As you can see, the main difference between this campaign and the other campaign that used to run in November is in some of the Keywords: this time, generic keywords mixed up with some brand-related keywords.

Besides, all keywords were set up with the same Match type: Broad Match.

So, in principle, this campaign could potentially have produced the same scenario that happened later in April: irrelevant search terms.

But first, let’s have a look at the Conversion Actions and Value generated by this set of keywords: As seen though, this campaign included both generic and brand-related keywords.

Notice the last keyword of the above example, in which I forcefully replaced the real hotel name with atalanta hotel chicago to maintain privacy: despite hotel in chicago triggered almost 7x more impressions, the brand keyword generated almost 8x more revenue.

2 different keywords, that responded to 2 different needs and search intents. Thus, technically and logically, the above setup was anyway wrong.

But let’s leave this thought aside and let’s get back to our apples-to-apples analysis.

Even though the campaign generated revenue, high chances that it could potentially generate way more revenue, at a way lower cost.

So, same as before, now it’s time to take a look at the search terms that triggered the most expensive generic keywords from the list above: hotel in chicago and boutique hotel chicago. This is what happens when dealing with Broad-Match type keywords, trying to get more traffic, ending up instead getting scam and paying for reservations that would have come in anyway, either for free or at a way lower cost.

If you limit your analysis to the quality of your keywords without understanding what search terms people use to trigger your ads, you are likely wasting money. A lot of money.

What about Branded Campaign?

So why those brand keywords were not used in a brand-protection campaign?

A brand protection campaign aims at protecting the brand name from the competition of the OTAs.

Logically, brand keywords are the ones with the highest CTR, lowest cost and highest Revenue, in proportion.

In fact, as of the very month of April 2021, the hotel started a brand-protection campaign. 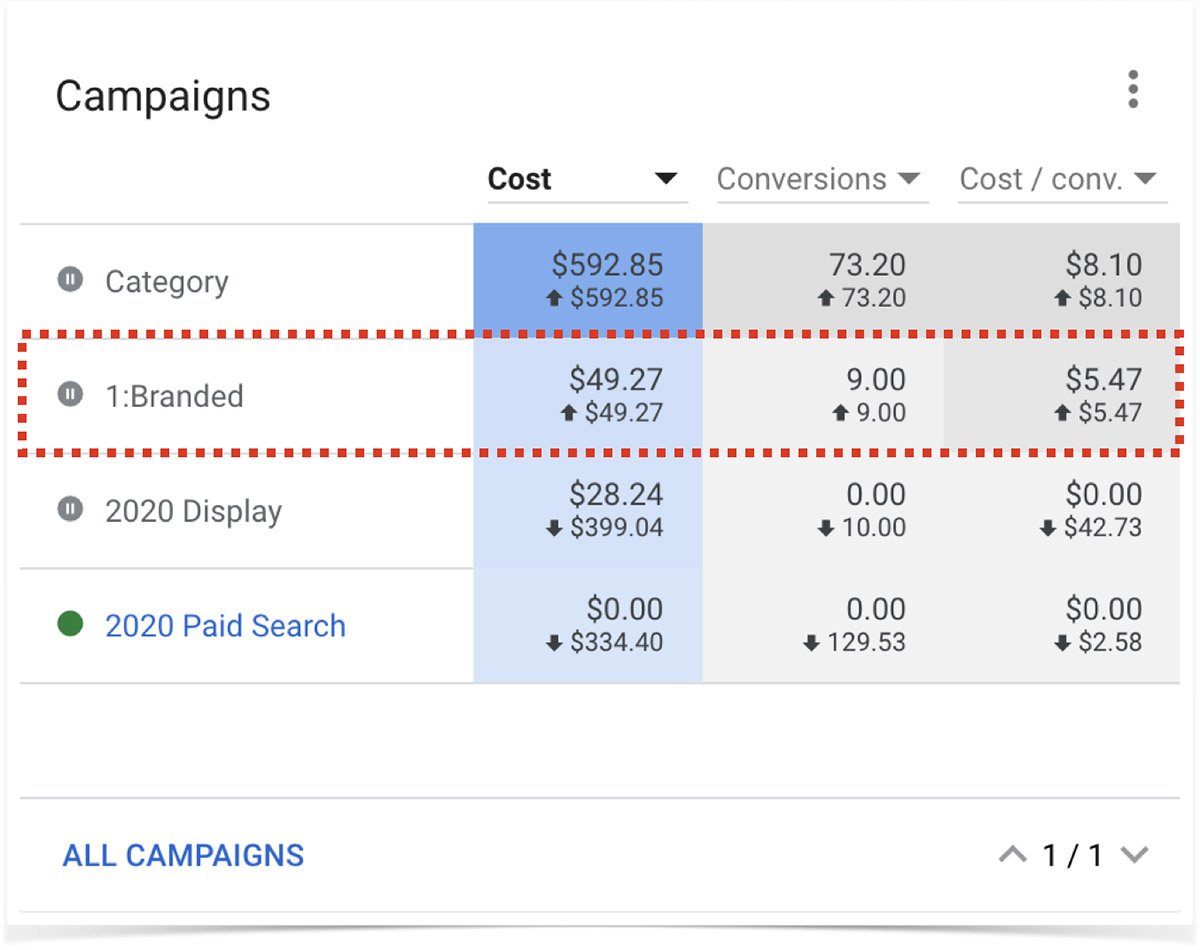 Again comparing November 2020 with April 2021 and summarising what we’ve seen so far for the sake of clarity:

First, how much revenue did this 1:Branded campaign generate in April 2021? In other words, in April this 1:Branded campaign was the only one bringing in some reservations.

Yet, as we can see, very few reservations compared to November 2020.

So now the second question: if in November the hotel got revenue coming from brand-related search terms, how come that it didn’t get any revenue from a dedicated Branded campaign in April?

No Budget, No Revenue.

The answer may be in the Ad Spend that you can see from the screenshot above: $49 spent over a period of 1 full month. Simple math, it’s $1,63 per day.

The answer is in Change History:

Simply put, with a daily budget of $1.50 this campaign could NOT perform.

Again, it’s simple math: with an average CPC of $0.34, the daily limit is reached after only 4 clicks.

The hotel wanted to know why it didn’t get the performance of the past, but as it turned out, also the past was not performing well.

From losing to generating revenue is a matter of logic, strategy and analysis.

As a matter of fact, the first thing I suggested doing was to create a campaign structure based on these 3 elements.

On the analysis side, the most important suggestion and starting point for every future step: no more keyword analysis without knowing the search terms that trigger them.

There are different and much more effective ways to drive top-of-the-funnel potential guests to become leads first and then customers.

Yet the path remains the same: logic, strategy and analysis.